Rabbit or the headlights? 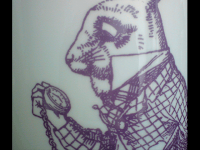 I heard a snippet of Marilyn Manson this morning, the lyric asking “are you the rabbit or the headlights?” For some reason, perhaps because I was at work today, this line made me think of assertiveness and it was a topic on my mind throughout the day.

It seems, broadly speaking, that whatever office environment you find yourself in there are two types of assertiveness on display. The first personality is naturally assertive. You know who I mean. They accept no-nonsense, no delay, no excuses and command a natural respect and admiration because of their ability to solve problems and lead teams stress-free through crises expending little effort.

The second personality is, unfortunately, rather more common and rather less effective. These are the people who are naturally shy, introverted or in some way lacking in self-confidence. They attend courses on assertiveness as though such things as the above can be learned. The resultant behaviour is over-eager, forced, and rather than achieving an effective working practice, has the opposite effect repelling colleagues with its falsity.

So next time you find yourself in a work-related crisis, ask yourself are you the rabbit or the headlights and charge!

Elloise Hopkins.
Posted by Elloise at 17:49