LARP: THE BATTLE FOR VERONA.
By Justin Calderone.

Dennis is a larper and he’s been a larper ever since he stood up for two of the unpopular kids at school. That decision sealed Dennis’ fate as one of the losers and lost him the protection and status having a football star brother had gained him. Dennis is still friends with those same two kids, still larping and still being mocked by his brother and everyone like him. And it’s not fair. He’s a professional success, intelligent and there’s far more to him than larping.

Dennis has reached a point where he feels trapped. Trapped by the life he is leading and trapped by the decision he made all those years ago. What ifs plague him. What if he had not saved them from the bullies? What if he had not taken up larping? What if he had listened to his brother? Perhaps the life he is living is not the one he is supposed to be living. And with that, Dennis decides that this weekend’s larping tournament will be his last. Unfortunately when crisis hits his hometown it looks as though Dennis won’t be able to turn away from larping just yet.

The book begins very much with Dennis in focus, but the roaming point of view that is used throughout is occasionally confusing, as it switches frequently mid-chapter and mid-scene. In fact there is a section in the latter part of the book where one of Dennis’ friends becomes the main focus of the story, and that means Dennis, who has been the hero of the story up to this point, takes a back seat for a considerable period, which feels slightly out of kilter with the rest of the narrative.

What is interesting is that when the main crisis of the story begins, Dennis and his friends are not immediately plunged into the centre of events, which makes for a refreshing angle on the ‘save the world’ adventure story. Much of the book is unpredictable which also works in its favour.

This is definitely a feel good book for all those who were mocked and called a nerd during their younger years. LARP fans will be thrilled at the level of detail and realism that Calderone captures. This is the kind of story where it is necessary to suspend belief and just go with it, but if you do you will find yourself enjoying a light-hearted and fun read. Pure escapism.

Elloise Hopkins.
Posted by Elloise at 16:00 No comments:

A Change of Hue… 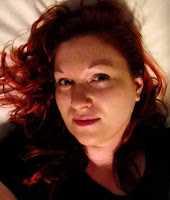 I wrote recently about being someone who needs frequent change and I am definitely in a period of change in my life. I’ve changed jobs, finished studying, changed the decoration in my apartment and now as you can see I’ve changed my hair colour. A change in hue was overdue and that has now been rectified. Balance restored.

I’ve gone back to red hair, mainly because I wanted to go darker for the winter, partly to give my poor locks a rest from bleach but also because I tend to have a regular three-yearly-ish cycle between red and blonde and the time had come.

The last time I had red hair, I was living in Sydney in the summer sun sure I had left England behind forever. Now I am looking out onto English winter snow wondering what changed in me that I can now see the beauty of this country and feel as though this is really home.

A change is as good as a rest, they say, and I believe that is true. The main thing I have learnt in this life is that when things look bleak, when days feel as though they are blurring into one insignificant haze and that sense of being unsettled comes over me, change is the cure.

Book review: Mark of the Blooded...

MARK OF THE BLOODED.
Book Two of the Kingdom of Graves Series.
By Leland Myrick.

Lord Prosper has shadows all over, it seems, and Blaise and his apprentice are no exception. The young Laurent has much that Blaise still has to teach him, but time may run out too soon. They are pursued by something evil, something without mercy. The Blooded – dark creatures of legend that no one really knows anything about – are on the move.

Char is haunted by memories, of Kaminika, of the Ten, of the king lying attacked, of shadows and elves. His mersy cravings are becoming stronger and his sleep is haunted by dreams of the kind that feel too real. The kind that are too disturbing not to be real. Evil is definitely out there in more than one form and Prosper seems to be at the heart of it. Char has a new mission.

Mark of the Blooded picks up where book one left off and continues the high-action, pacy style we became familiar with in The Ten. Jorophe’s story among The Ten continues, but it is Char who feels like the protagonist in this volume. He is written with great depth and insight and is a strong focus around which the story plays out. The worldbuilding is also depicted skilfully and action is well balanced with exposition where necessary.

Combat is a great strength in the story once again. Gore is handled appropriately with tight description and occasional witty character remarks and reactions to ensure the right tone is maintained throughout the book. The plot is strong and its unpredictability ensures the reader continues through each chapter as the different bands of warriors and assassins follow their goals.

Mark of the Blooded also reveals that underlying threat to the world which came into focus towards the end of book one – where The Ten left much unresolved, book two is much more of a whole story that explains the history and wider concerns of the world as well as continuing the adventure and action sequences. The climax is satisfying, but saying that, there is certainly scope for another book in the series after this one.

Elloise Hopkins.
Posted by Elloise at 18:44 No comments:

I was re-capping the books I read last year (it still feels strange to be referring to 2012 as last year) and decided to name my top five of the year and also my top five upcoming titles this year, that is 2013, which also feels weird to say.

So my top five books released in 2012 are the following, and this I have based on both the enjoyment I got from reading them at the time and the lasting impressions that stuck with me long after I had read them.

And my top five anticipated books for 2013 are:

The Republic of Thieves we’ve all been waiting for. Enough said. Fingers crossed we get that this year. Blood of Dragons is the conclusion to Hobb’s The Rain Wild Chronicles, which began slowly but has now secured its place as a Hobb great. Brent Week’s third book in the Lightbringer series is securely on my list after the impressive The Blinding Knife. Sworn in Steel is perhaps a quiet contender but again one I’ve been waiting for having really rated Among Thieves. Fiona McIntosh’s Scrivener’s Tale is perhaps the wild card  – being a huge fan of her later trilogies I’m curious how this stand alone will have turned out after her break from fantasy.

I also have two honourable mentions because I have already read these and assure you they are definitely worth looking out for in 2013:

Some great reads and some highly recommended authors, though of course not a definitive list. Go enjoy and share your own.