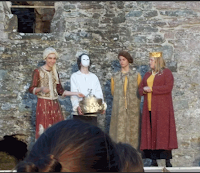 Festival Arts is a Birmingham based theatre troupe that relocates to St. David’s, Pembrokeshire, every summer to perform an open-air Shakespeare in the ruins of the abbey, a show for children at a local church hall, and the Sunday show – an evening of poetry, prose and music as they deem it.

This year I was lucky enough to catch both the kid’s show and the Shakespeare and got my yearly reminder of how much revenue and quirky entertainment the group brings to this seaside city. I have been watching Festival Arts summer performances for years and highly recommend it for a great summer seaside break with a difference.

Tuesday night gave me the colourful, musical extravaganza that is The Quest of the Jumblies. Based on the strange and wonderful poems of Edward Lear, this story is engaging enough for children while at the same time appeals to an adult’s love of the unusual and the lyrical. In fact the programme encouraged me to write my own Lear-ish limerick, which led to hours of post-show pub entertainment.

Thursday night I wrapped up warm and took up my place among the local birdlife in the atmospheric Bishop’s Palace for a performance of Shakespeare’s The Merchant of Venice. The play was executed to a high standard and greatly enjoyed by all, but ever humbling is the effort and energy that goes into the shows from the performers, musicians and stagehands. They transform the ruins of the palace into a fully lit stage for a totally unique open-air show and the effect is truly magical.